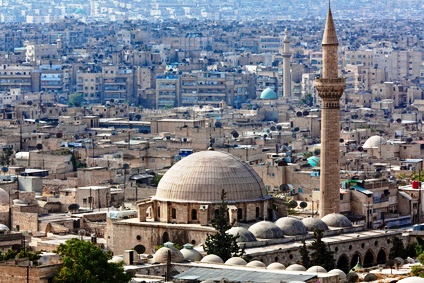 The final chapters are rolling out of the battle over Aleppo, which was once the Ottoman Empire’s third finest city after Cairo and Great Constantinople. By the time we knew that it existed, it was already largely rubble. We wondered what its history was, and how the ‘Capital of Islamic Culture’ looked before the troubles began. Aleppo has had mention in history for over 5,000 years, although archaeologists have been unable to dig it up because of all the buildings crammed onto the site. We do not suppose there will be time to correct this oversight in the scramble to re-establish basic living standards. Various people have invaded Aleppo previously, including Alexander the Great, and the Roman Emperor Pompey. It was a Christian city for a while, until Abu Ubaidah ibn al-Jarrah captured it in AD 637. From there, it passed through various hands including Saladin rulers, and the Mongols.

Aleppo has never really known peace since then. It became part of Syria after World War I, although this never really settled anything. Our hearts reach out to the good citizens of Aleppo wherever they may find themselves.

We hope that someday they may be able to return, rebuild their homes, and live in peace. The panorama of the city - as it used to be - is from Fotolia # 18979067